A quick background on the estate and why it's not called "Chianti":  It's situated in the heart of Chianti Classico, near Radda (highest elevation in Chianti Classico), on a historic hilltop hamlet called Montevertine that dates back to the 11th century and was used then as a defense fortress.  In the 60s, it was purchased 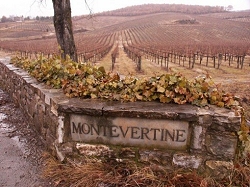 by Sergio Manetti as a second home and was planted to 6 acres of vines (farmed biodynamically!) to produce a humble wine for the family and neighbors to enjoy.  By the early 70s, local praise for the quality of his wines made Sergio quickly left his day job to focus on growing and producing this wine. This became a bit of a problem. Back then, the Chianti Consortium had rules for the wineries of the region--all Chianti wines must be made with a percentage of the white grape, Trebbiano.  Sergio wanted nothing to do with this and wanted to keep his wines pure, utilizing almost 100% Sangiovese with small amounts of Canaiolo and Colorino.  So he backed out of the Consortium, and to this day his wines are simply labeled as "Rosso di Toscana", forgoing the Chianti Classico label, which many others were not willing to do for fear of losing out on the increased sales and marketing that having Chianti on your label brings.  Montevertine doesn't even make enough wine to worry about not selling it all, and frankly, the wines are so singular that labeling them Chianti would almost be a travesty.

Wine lovers and critics like Eric Asimov and Antonio Galloni have praised Montervertine for years, saying tasting their wines have "taken their breath away" and have called the estate "truly iconic".  There have been retrospective tastings dating back decades on their wines.

We are in this boat too.  There is something extremely special about these wines.  Their elegance, purity, its the heart and soul of pure Sangiovese fruit. Never bludgeoned with Oak, or cut with Cabernet like the "Super Tuscan" wines.  I often say that Montervertine drinks like the Burgundy of Italy.  They are aromatic and lifted wines, wines you could smell for hours before even taking a sip.  There's nothing hard-edged about them, they are seamless from front to back.  And honestly, just a sheer pleasure to smell and sip.

Today we have two wines from two very different vintages. The 2018 "Pian del Ciampolo" – Montevertine's entry-level bottling – is our first taste of what appears to be an epic vintage in Chianti. It was a warm year, but not overly so, and, unlike most years now, saw no extreme weather events. The 2018 Chiantis we've tasted so far (like the Monte Bernardi "Retromarcia" we offered a few weeks ago) have been uniformly beautiful. They combine the tense structure we love about Chianti with wonderfully vibrant, dark fruit. Not that it's a competition, but we suspect that even in a year with so many great wines, the "Pian del Ciampolo" will be our favorite early release of the vintage.

The estate's flagship wine, the Montevertine Toscana Rosso, comes from the much more difficult 2017 vintage. The growing season was exceedingly dry and yields were unusually low. The resulting wines from other estates were often bluntly tannic and cooked. But one of the most important lessons in wine is this: great producers make great wine even in the worst vintages. The 2017 is a testament to Montevertine's winemaking prowess. Decades of experience crafting some of the most pristinely elegant wines in Italy – coupled with helpfully high-elevation vineyards – allowed them to harness the power of the vintage and use it to their advantage. The 2017 Montevertine is one of the best vintages of the wine made yet, and easily one of the best Italian wines of the year. This is a monumental Montevertine, one to lay down for decades.